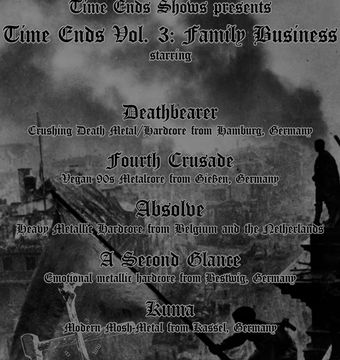 Time Ends Showcase presents its first show under the flag of the collective "Time Ends Family" and we want you to celebrate it with us and five awesome bands including...

FOURTH CRUSADE (Gießen, DE)
Fourth Crusade play a mix of crushing 90s Hardcore and the raw brutality of Thrash and Death Metal with an outspoken stance on animal rights, veganism and environmentalism not unlike 90s Metalcore giants Arkangel, Day of Suffering, Reprisal, From The Dying Sky and Morning Again. Fans of the mentioned bands, baggy jeans, tulsi neck beads and vegan spinkick wars will have their fun with this one.

DEATHBEARER (Hamburg, DE)
Deathbearer from Hamburg sound like they came from a place another thousand kilometers further in the north. What we are talking about is Sweden. These guys play merciless Death Metal influenced by the Swedish Death Metal scene of the late 80s/early 90s (see Entombed, Dismember, Grotesque) and garnish it with the uncompromising mosh parts of Hardcore music. Horns up for Deathbearer!

ABSOLVE (Belgium/Netherlands)
Risen from the ashes of the disbanded Blind Beliefs, Absolve play crushing 90s-tinged Hardcore reminiscent of early Victory releases by bands like Hatebreed, All Out War, No Innocent Victim and Another Victim. Everyone who saw them at their show in Siegen witnessed that these guys know how to bring the mosh and we are more than confident that they will do the same in Gießen!

A SECOND GLANCE (Bestwig, DE)
We all have our softer sides and that's why our lineup has one, too. A Second Glance from Bestwig combine emotional, melodic guitar work with heavy hardcore breaks and kinda deep lyrics like it was done by bands like Poison The Well, Skycamefalling and This Day Forward back in the days!

KUMA (Kassel, DE)
Combining the complexity of modern Death Metal with the mosh flair of New School Hardcore, Kuma from Kassel can be compared to the first wave of Deathcore bands like Job For A Cowboy, All Shall Perish and Despised Icon. If you are into technical guitar work and punching the air like a mad man, this one is for you.